Your Ignorance is their Power 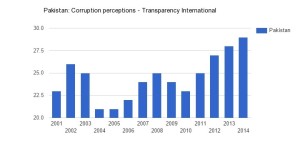 The Corruption Perceptions Index for Pakistan from Transparency International

Corruption has severely as well as badly infected the base of every field of Pakistan. Due to its very existence Pakistan is not able to perform well in the development projects.

As the outcome of Pakistan Movement in 1947, “The Dominion of Pakistan” was reformed. On achieving independence, a robust bureaucracy and army was respectively inherited by Pakistan from the British Era. Since then, there’s not any amendment made in this bureaucratic setup, although several reforms were presented by the Musharraf in 2007. The reports published by the World Bank at different times says that the Pakistani Bureaucracy is a kind of plentiful when it comes to corruption with the accountability absence and also resistant to change. 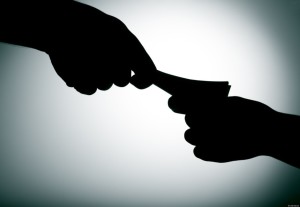 Corruption directly results in a persistent decline of a country. Inflation, poverty, inequality, unemployment, these are said to be the most dreadful as well harmful aspects which wholly ruin a Nation. It not only shamble the economy but also deteriorate the quality invigilation like law and order and wistfully we the Pakistanis, the population of 182.1 million are now experiencing these mentioned callous conditions and the root cause of this ferocious circumstances is OUR IGNORANCE which simply powers CORRUPTED ones.