Prime Minister Nawaz Sharif while presenting laud to the very initiative seized by Sharmeen Obaid Chinoy’s documentary named “A Girl in the River: The price for forgiveness.” While praising such step PM said that Islam holds equal rights for Men and Women. No one is superior or inferior on the other. While praising such step PM Nawaz Sharif said that there’s literally no honour in “honour killings.” He further said that Government of such states must take remedial measure in order to secure the dignity of women. 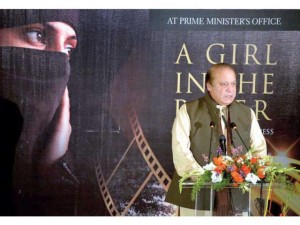 The premier also addressed the gathering in the screening of Sharmen Obaid’s documentary being held at Prime Minister House, Islamabad. Premier said, “We are proud of Sharmeen Obaid-Chinoy’s significant achievement and her work is an inspiration for the cause of social change for women worldwide.” The documentary also bags the Oscar nomination which is quite huge initiative.

While addressing to the crowd PM said, “More than the awards, Chinoy’s greater contribution lies in her choice of her themes which are technically difficult and socially challenging. She has drawn our attention to the dark side of societal behavior; something about some of us chooses to remain uninformed.”

Premier further said that Sharmeen is a proud daughter of Pakistan, we are surrounded by such drastic social culture and such society, the struggle to fight for the women justice is something that can’t be explains in words. 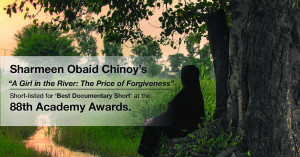 Sharmeen shared to the listeners that her father stood with her and towards her ambitions. In address she said, “Speaking the truth is difficult in Pakistan but the courage given by my father enabled me to take the initiative.” She was glad that her documentary was being screened in Pakistan.

The film tells the story of an 18-year-old girl, a survivor of an honour killing attempt and falls in love and survives to tell the tale. Previously, her documentary named ‘Saving Face’ got the honor to bag Oscars for Pakistan for the first time.