According to a recent survey, around 8.9 million people in Pakistan are drug addicts while 700 people die on a daily basis in the country due to drug–related complications making the deaths related to drugs greater than those caused by terrorism. About four million Pakistanis including teenagers as well as aged people use heroin on regular basis and about six million cannabis users are addicted to ‘charas’. Due to these drugs being tremendously cheap and conveniently accessible, the abuse of cannabis and heroin is comparatively high.

In October 2016, an NGO reported that about 53% of the students in leading private school chains are addicted to various kinds of drugs in Islamabad. Since these private schools ask for huge sums as fees, most of the students belong to wealthy backgrounds and affordability is not an issue.

Similarly, a recent study which included 10 schools and 2 universities from Lahore revealed that 57 percent of students reported the use of at least one drug. Following the alleged death of a LUMS student due to the drug overdose, several more were caught from Quaid-e-Azam University (QAU). It was also found out that the students were using local tablets, liquor, hashish, and heroin.

The survey revealed that the majority of drug addicts usually start with soft drugs like chhaliya, gutka, and pan, and then move to hard drugs like heroin, opium, and cocaine, etc. The purchase of drugs or alcohol by young people is usually through dealers or ‘agents’, who are just a phone call away. Their numbers are easily exchanged from one person to another. The contact numbers are also widely distributed throughout hostels, hotels and other places that are generally hidden from the prying eyes of law enforcement agencies.

The phenomenon of growing drug abuse cannot be viewed in isolation from the prevailing socio-political and economic realities. Young people are increasingly aware of the existing setup where corruption, cronyism and financial power are the order of the day. The youth would prefer not to be a piece of this severe framework, and without a reasonable option, they discover escape in drugs or terrorism. According to social scientists, political and social upheavals of the last six decades have played a crucial role in shaping the overall psyche and behavior of the youth: increasing economic inequality, unemployment, political uncertainty, terrorist attacks, suicide bombings and endless sectarian and ethnic clashes. 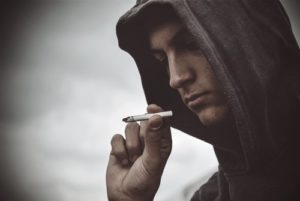 The worst thing about being addicted to drugs is that it is affecting the youth in every part of the world in a major way. The trouble starts among the school-going children but the problem is worse due to those who wish to earn money out of selling drugs. The problem among children and youth arises because they seem to think that they are failing to measure up to the expectations of their elders. These days, it has become really common for the people belonging to showbiz to include stories of drugs addiction in their films and music. So instead of promoting good values in the youth, the showbiz industry is responsible for promulgating the use of drugs, which is increasing the addiction to drugs in the both first world and third world countries.

According to experts, the easiest and most effective solution would be to send addicts to a rehabilitation center. A humanistic form of treatment has been found to be most effective in dealing with drug addicts. But, first of all, awareness and prevention must start at home, with parents. Parents should be vigilant and keep an eye on the company their children keep and their activities. Experts recommend that the devastating effects of drugs should be discussed even at school level, and awareness raising campaigns should be launched, especially through the electronic media.

Drugs addiction is a very serious problem in Pakistan and even if the addict is using prescribed drugs, the ill effects can be very harmful indeed. If these drug addicts are provided with the right kind of information then it can help them to avoid drug intoxication and it can also prevent health related issues.

It is high time to take serious actions now, otherwise, a big proportion of today’s youth will be ruthlessly compromised. This issue of drug addiction is way too serious to be taken lightly. The governments need to involve communities and media in highlighting the perils associated with the drug addiction. Media has a responsibility to highlight such issues with a view to educating people and building a consensus among them to forge a united stand against such scourges.

Next post Why You Can’t Miss the Upcoming Pakistani Horror Movie ‘Aks’?

Is Child Labour The Solution To Starving Families?