Kindness is a virtue, we all have listened to it, a lot from since forever. Kind people are a blessing in this world. They are the gems and the jewel in the crown of the world. The sense of love, affection, and fraternity to spread love is all included in kindness. And the people showing all these qualities are angelic and kind people which are needed to make this world a beautiful and peaceful place to live in!
Just like other countries Pakistan also has these gems which have proved them to be a milestone in the cause of humanity. Most prominent and leading name in this cause of showing virtues of kindness towards humanity, is Abdul Sattar Edhi, the founder of the Edhi Foundation.
Yes, he was a very kind hearted human being who loved to take care of depressed souls and sorrowful people. He was a poor man with a heart of gold. He had no money at all b, in spite of that he managed to collect funds for his organisation, which aimed to protect the insecure ones, to provide food to the hungry, to provide shelter to the homeless and to be available every time with all its ambulances wherever and whenever needed, all of the services 24/7!!
Edhi Foundation has been a very funded foundation from within the country and abroad too. People know that they’re investing their charities in a very deserving organization and that all of it will go in the right hands, all the needy people will have it. Abdul Sattar Edhi became the hero of the nation by the time and was loved by every Pakistani. Just because, he believed in the love of humanity and in doing all possible efforts he could do to make the world a better place for the humanity. He was a torch bearer of the brotherhood and eternal live amongst mankind that he had always emphasized on the fact that every human is worth a life and that, we should try to sort out the problems and issues our fellow human beings are facing.
The volunteers of Edhi Foundation are ever ready for when the duty calls, and anytime ready to provide services. The foundation also has old homes and cradles for orphan babies. Moreover, ‘dastarkhuwans’ are also arranged at the afternoon by the foundation to feed the less privileged and poor. Whenever any sad incident of terrorism or killings of people happens Edhi Foundation with their volunteers and ambulances are ready to serve. In a nutshell, Edhi Foundation does the job for the welfare of mankind.
This all is due to the endless sacrifices and hard struggles of the hero of the nation, Edhi Sahab. His death was a serious setback to Pakistanis and indeed an irreparable loss for mankind. He was the one, who even donated his own eyes before his death according to his will. Thanks to him for always being there for the suffering of humanity and have them the lights of hopes. For making our lives better and for making us realize that some angels appear in the form of humans too. His first death anniversary was held on 8th July and all the people remembers him in good words and prayers. A hockey ground in Karachi is also named after him, Abdul Sattar Hockey Ground. 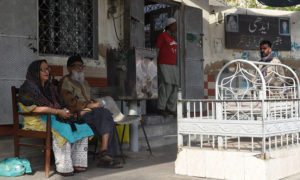 Nation will always remember him as its hero and a very kind hearted person who devoted his life to the welfare of people. Who, even in his last days started charity campaigns being on a wheelchair and not quitting at all. May his soul rest in peace and may more heroes like him born in Pakistan, for he was the ‘RICHEST poor man’.