Illiteracy is the lack of knowledge or inability to read or write, which is a major concern in Pakistan. People who are illiterate face many difficulties especially when now everything has become faster than ever, by means of technology and education. 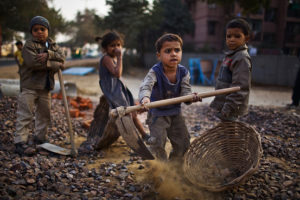 There are plenty of reasons for this rise in illiteracy rate, like the unequal education system, different medium of instruction in public and private sector and so on. In FATA the literacy rate is deplorable constituting 29.5% in males and 3% in females. Whereas the allocation of the resources is very low. There are unprofessional and non-trained teachers, lack of technical education. Serious work needs to be done here. There are a lot of people/children who want to study but they are unable due to the lack of resources and awareness, children are forced to do work and become slaves for eternity to bring little amount of money in the house, for women it has become a symbol of status, particularly in rural areas, women are only supposed to do domestic work where else they could have done much more if they were given the chance to do so.

Access to basic education is the right for every individual, it is the most important instrument in enhancing human capabilities and achieving the desired goal. Literacy enables a person to make well-versed choices, broaden their potentials and opportunities and to have a voice in public.

The country where the illiteracy rate is high, faces tons of problems, socially, politically and economically. If this problem is not looked into than the country itself will be in a great distress. Over population is another problem which is led by the high rate of illiteracy, rise in unskilled laborer especially child labor, low GDP and per capital income, political instability, poor international image, moreover the country can be in a huge international debt and so on.

“According to World Bank Report, Pakistan’s spending on public sector education is only 2.3 per cent of the GDP and this is much lower than the south Asian average of 3.6 per cent”.

Government should increase the education budget, establish more schools with trained teachers, and promote primary education in all areas of the country. Only then the country will rise itself, people will have a purpose in life because without education life is incomplete, it’s without any kind of hope, we need it for us and our future generations, we need it to have a standard of living, we need it for equality. 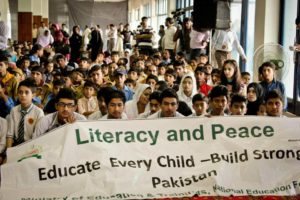 “It does not matter how slowly you go, as long as you don’t stop.”

Previous Article Coins In The Honour Of "Abdul Sattar Edhi"