When we talk about our Pakistani TV programming, so unfortunately we don’t have much to talk about apart from drama or political shows. Indeed our TV industry is booming at this moment but it is diversity where we are lacking badly. We either have saas-bahu dramas or politicians pulling each other’s legs on political shows on TV.

In recent times, one show which doesn’t belong to any of the above-mentioned category caught the attention of audience and critics alike and has been getting rave reviews ever since. Yes, here we are talking about the non-fiction public service show ‘Khatra’ which airs on SAMAA TV every Friday night at 11.05 pm. The ratings hit show has already garnered a huge fan following and more and more people are tuning in by each passing week. 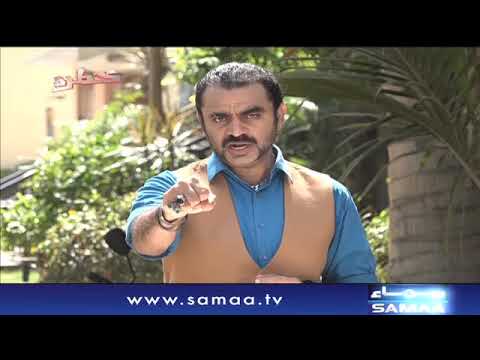 The show is being hosted by none other than TV and Radio personality Ajnabi, who previously hosted a similar show on Jaag TV called ‘Haadsa’. Ajnabi has been associated with TV, Radio and Film Industry of Pakistan since a long time. When our team contacted him to ask about his show, so he replied, “With Khatra, we have taken things to the next level”. The show not only informs or warns you; it also entertains you as well”.

We also asked Ajnabi that why he chooses to do more non-fiction shows. So he said, “Our society already has enough entertainment shows and I believe guidance is what they really more at this moment. So I choose to do something which has a bigger purpose”.

So, let’s wish the very best of luck to the entire team of Khatra. So let’s check out a recent episode of Khatra which aired earlier this week.

Next post Amir Liaquat Left Bol, After Some Confessions