How It Started: Rohingya Muslims

The world’s fastest-growing humanitarian and refugee crisis, Rohingya Muslims which has a population of 1 million have become a helpless minority. Hundreds and thousands of Rohingya Muslims have left their homes and fleeing violence in Myanmar’s Rakhine state have sought shelter in neighboring Bangladesh, they have crossed the border where the Myanmar military has launched a barbaric campaign against the minority. “The United Nations reported that since 25th August 2017, a vicious cycle violence has led more than 400,000 desperate people to flee, putting regional stability at risk.” September 19, 2017. Reports claim that military has been killing and raping the Rohingya and setting their villages on fire, satellite images from Amnesty International showing burned down villages, confirms those reports. “Because Myanmar has refused access to human rights investigators the current situation cannot yet be fully assessed,” Zeid Ra’ad Al Hussein, the United Nations high commissioner for human rights, said in a statement. These pattern of events and discrimination against the Muslim minority in Myanmar started back in 1962 when Burma was taken over by a Military coup and like many dictators Gen. Ne Win, then the leader promoted the fierce nationalism based on Buddhist identity. Thus, they needed an enemy to help unite the nation and promote nationalism. The Rohingya Muslims were singled out as a threat, the tension among these two groups got more critical during Second World War when each group supported different sides, the Rohingya sided with British colonialists who ruled the country but the Buddhists mostly sided with the Japanese hoping that they will end the British rule after the war. 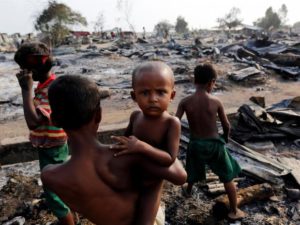 The picture got worse when in 1982 the government legislated the new citizenship act recognizing 135 ethnic groups, but the Rohingya with the population of 1 million were left out and the government did not include them in the list. Hence, they became a stateless people. In 1991 Myanmar Military launched a campaign called “Operation clean and beautiful nation” against Muslim minority which results in about 250,000 Rohingya fled to neighboring country Bangladesh, tension continued and violence broke out in 2012 when four of Rohingya Muslim men were accused of involving in raping and killing of Buddhist woman in Rakhine state, Buddhist nationalists backed by security forces attacked Muslim neighborhoods and burned their homes down to the ground displacing thousands of Rohingya again, Human Rights watch deemed it an ethnic cleansing campaign. By this point, The Rohingya were persecuted, disenfranchised and stateless. In 2016, A Rohingya militant group the “Arakan Rohingya Salvation Army” emerged, coordinated small-scale attacks on Myanmar’s border police stations. In August 25th, 2017 deadly clashes erupted in Myanmar’s restive Rakhine state left twelve policemen dead which triggered the current crisis against the Rohingya Muslims and a brutal retaliation by the state military and security forces led to about 400 deaths and the mass exodus of about 400,000 Muslim Rohingya to neighboring countries. Since, the following attack approximately 200 villages have been burned down, But Myanmar’s de facto leader and noble peace prize winner Aung San Suu Kyi has barely acknowledged the attacks. “We know very well, more than most, what it means to be deprived of human rights and democratic protection” she said in her statement. Given the facts, it is to believe that the Rohingya Muslims have been systematically driven out by the Myanmar government and the violent campaign by the military has sparked the fastest growing humanitarian and refugee crisis in recent years. 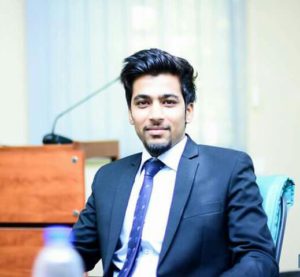