Stop Redesigning Islam On The Slogan OF Feminism

Waking up this morning, I came across an article written by a feminist in which she was mocking at Burqa Culture and protesting against General Zia (Former President) for being non-feminist and implementing several laws that were against feminist groups. Feminism-a belief that Women and Men are equal based on their sexes, is not new in Pakistan. However, it has cemented its roots in an Era of strong media and after 9/11 catastrophe that propelled everyone including Journalists, Politicians and religious scholars to debate on Islam that has led to many misconceptions.

Feminism is not bad, but being a feminist in Pakistan or any Muslim state is really unacceptable. It can be acceptable in a society that has no religion, or the religion that does not includes the rights of women and is incomplete regarding the issues of Women, whereas, in a Muslim society, one can’t be a Feminist since Islam has already given rights to both Women and Men, as a matter of fact, Islam was the first religion on Earth to bring protection for Women in every aspect of life. Most highlighted topics for being a feminist in Pakistan are the honor killing, sexual harassment, and discrimination at the workplace so are these issues not mentioned in Islam? What do our religion states on honor killing and sexual harassment? We have never bothered to look into it since we believe only new laws can bring protection to women.

Feminists in Pakistan are so active; it seems it is the largest issue of Pakistan. Before doing any research, I thought every 2nd women of Pakistan has been through any sort of harassment or honor killing, but the facts were quite amazing. According to the figures presented in Parliament in 2015, there were 933 cases of honor killing in which 33% victims were male. Yes I repeat, they were Male, before reading this, you would have never thought of Males being victimized since you had never heard about it because they were Male. However, as a Muslim I find honor killing disgraceful and inhumane and against Islam, since Islam teaches us killing of one innocent man or human is a killing of entire human race. But, had it being a single woman, feminists would have come to streets and start protesting. Acid attacks on women are another major rallying point used by modern feminists. Again, the practice is horrific and deplorable but according to study between the years 2007-2015, there was a total of 1231 victims of which 31% were men, a fact ignored blatantly by feminist friends.

No person on earth would appreciate honor killing, acid attacks or harassment, so why do non-feminists censure feminist group? All these practices were a priority of traditional feminists; however, modern feminism has tempted non-feminist & religious groups to unite their heads. Modern belief of feminism mostly revolves around equal rights of women based on their appearance, clothing styles and several practices by men outside the home such as in the market, workplace etc. They believe it is fine for a woman to fart, burp or scratch their private parts in public since men can do it. They think it is a choice for women to wear DUPATTA when they go out, they have a problem with their surname after marriage because they think it is a sign of giving less value to women and more to men, mothers are less likely to be hired as compared to men and much more.

I can’t understand why it is so hard for feminists to believe that there are some biological differences in Men and Women due to which they can never be dealt in same way as men are!! Can a pregnant lady stand in a line to book her ticket to Lahore? If, no then where are the equal rights gone now? People need to think of it before becoming a Feminist!!

Hence, as a common person being born in a Muslim family, I would believe that the modern thought of Feminism has provided an umbrella to feminists to alter the religion-Islam in accordance with their own benefits. They want to do whatever they would like to do while mentioning it is the part of religion, or somewhere saying it is not part of Islam. They believe Burqa or covering body parts is not necessary for Islam whereas there is no truth in it. Feminists are not arguing government or the system, they are arguing the Almighty Allah because there are several laws enforced by the Supreme power and we have no right, no worth to speak on the God’s decisions. If God has ordered women to hide/cover their body then it has to be done, and if not it is a wrongdoing according to Islam. Unfortunately, in the race of equal rights with men, their minds have trapped, they want to go against the God’s rules but they want to be called Muslims, they are finding the ways in Islam that suit them and ignoring everything that goes against them.

Finally, a request for all my friends who believe all evil against women is confined within the boundaries of Pakistan; I invite them to check the figures with regards to domestic and international sexual abuses and harassment of women. As a simple example, 1 in 4 women in UK suffers from sexual abuse in their life, while two women are murdered every week. Pakistan is way too far from that, had it being a good thing, there would have been millions of feminists in Western societies, however, they are not!! Every religion has its own rules, commandments, and way of life, if someone is not comfortable with any of that, then you can do whatever you want but without tagging your name with Islam.  Stop trying to redesign and modify Islam. Islam is a religion that came upon our Holy Prophet (PBUH) and it will remain same until the Day of Judgment, anyone trying to restyle it would have to bear condemnation on the day of judgment. And if you want to know what your rights are according to Islam then stop asking people around simply go and read it yourself because people can be wrong but the real source of information can never be, that is “Quran”. And even if someone is lacking behind to give you rights according to Islam then you surely can raise the against them but not against every men, please. 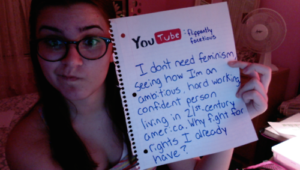