Undoubtedly the biggest European competition at club level, Uefa Champions League’s season 2015-16 came to a dramatic end in Milan, Italy in which Real Madrid defeated their city rivals Atletico Madrid 5-3 on penalties to be crowned the champions of Europe for the eleventh time. No other club can match this achievement. The match ended 1-1 after 90 mins of normal time. Sergio Ramos, the Real Madrid captain gave Real Madrid the deserving lead in the 15th minute of the game and the first have was completely dominated by Real. Atletico Madrid came back strong in the second half but their French forward Antoine Griezmann missed a penalty to put them back on level terms but even after such a blow they pushed Real Madrid on the back foot and eventually scored an equalizer in 79th minute virtue of their Belgian midfielder, Yannick Carrasco. It was a high pressure match. Both teams gave their all but they could not be seperated at the end of the game. Extra time was also not enough for them to be seperated and after 120 mins of gruelling football the final proceded to the most nerve-wracking way to decide a winner, Penalties. 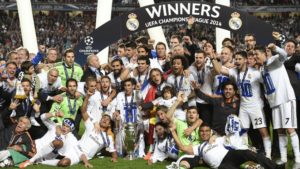 Real Madrid started the shootout confidently when Lucas Vazquez scored their first penalty. Antoine Griezmann, the Atletico Madrid forward redeemed himself by scoring a penalty this time. Marcelo scored the second penalty for Real, Gabi made it 2-2 for Rojiblancos. Bale, the 100 million man for Real stood up and converted the third spot kick to make it 3-2 in favour of Los Galacticos. Saul, the year 21 year midfielder took the responsibility of third penalty for Atletico and scored with authority. Ramos, the captain for Real Madrid who also scored in normal time for his team scored a calm penalty to make it 4-3 in favour of Real Madrid. Pressure was mounting, a nervous Juanfran stood up to take the fourth penalty for Atletico but he missed it and the ball struck the cross bar. It was Real Madrid’s all-time top scorer Cristiano Ronaldo to step up and score the winning peanlty for Real Madrid and crown them champions. Ronaldo scored and Real Madrid became champions of Europe yet again. Atletico Madrid gave their best shot but Real proved to be the better team on the day. Cristiano was also the top scorer of the tournament with 16 goals.

Real Madrid qualified for the final by beating French champions PSG, Swedish Champions Malmo and Ukrainian champions Shakhtar Donetsk in group stages, Italian club Roma in Round of 16, Germany’s Wolfsburg in Quarter finals and English giants Manchester City in semi finals. Atletico Madrid’s road to the final was a tough one. They started of by beating Portugese club Benfica, Astana and Turkish club Galatasaray in the group stages, Dutch champions PSV Eindhoven in Round of 16 then mighty Barcelona and Bayern Munich in Quarter finals and semi finals respectively.

Previous Article 10-Years of empowering children of Lyari through compassion