TRUMP SAYS NO MUSLIMS IN THE USA !

The republican candidate Donald trump currently leading the polls says that all the Muslims should be banned entering in USA as they all are not reliable but the mayor of London is an exception. But majority on Americans support this idea of Trumps the polls shows that around 51% are supporting him, whereas  the Obama establishment is totally against this idea of banning Muslims in America. 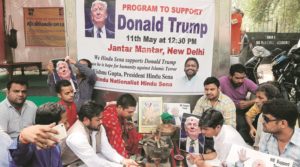 According to some research there are many fans of Trumps living in India and they all have prayed  to their gods for his victory. It seems like he has got some fans faraway in India due to his terrible and discriminatory idea against Muslims.