Islamabad: Federal Finance Minister, Senator Muhammad Ishaq Dar on Saturday said that all the provinces would be asked to take appropriate measures to maintain prices of basic food items during the holy month of Ramadan.

Finance Minister Ishaq Dar, while paying heed to the alarming situation especially versus the costs of pulses has directed the concerned powers on Monday, to find a way to bring the cost at reasonable and fitting level.

At the point when his consideration was drawn to the rising rates of fruits, vegetables and other sustenance things amid the post spending plan press conference, he said “we will ensure to maintain costs in Ramzan”.

In the meantime, the central government has officially declared Rs.1.75 billion Ramzan bundle to give alleviation to the general population through Utility Stores Corporation (USC) amid Ramzan to be viable from June 1.

The minister added that 22 every day utility things would be accessible on sponsors rates at all USC outlets till the most recent day of Ramzan. 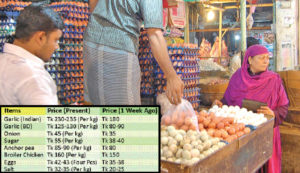