NO MORE ON-SCREEN ROMANCE FOR SHAHID & KAREENA – SAYS BOTH 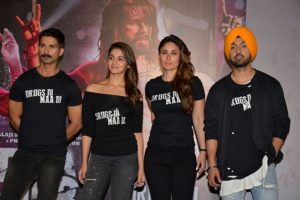 UDTA PUNJAB is an upcoming crime thriller based on drug addiction starring SHAHID KAPOOR, KAREENA KAPOOR, ALIA BHATT & DILJIT DOSANJH. Last night the trailer of the movie was launched and it is already a hit, the trailer has hit ONE MILLION views on YouTube in less than 24hours. At the trailer launch SHAHID & KAREENA interacted with each other very decently as it was the first time after their breakup that they are doing the movie together. Although SHAHID & KAREENA are not starring opposite each other in the movie because ALIA BHATT is the LEADING LEADY, she is the main heroine of the movie and she is the on who has a big role with SHAHID. While KAREENA is paired with famous PUNJABI actor DILJIT DOSANJH. At the trailer launch media asked SHAHID & KAREENA whether they will be paired for a romantic movie like JAB WE MET once again? They were also asked that whether they were happy or unhappy that they are not sharing screen space together in UDTA PUNJAB? To which SHAHID replied, “So you are asking are we happy or unhappy about something that has not happened.” Hearing this KAREENA joked, “The DVD of Jab We Met is available in the market.” 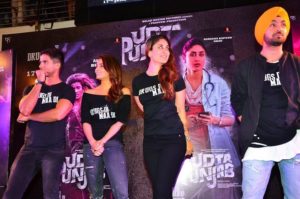 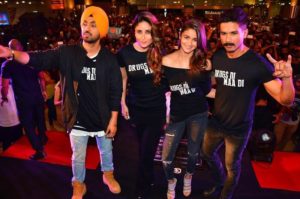 So it clearly means that both SHAHID & KAREENA hinted that they will never romance each other on-screen. Earlier at the event both of them maintained a distance from each other. ALIA BHATT stood in between them throughout the event & even when posing for shutterbugs despite them being asked to stand together, Shahid & Kareena refused to pose alongside each other & pulled ALIA BHATT in between them before posing.

UDTA PUNJAB is slated to release on 17th June 2016 under the banner of BALAJI MOTION PICTURES.