I SEE HUMANS BUT NOT HUMANITY!

Humanity! A word, just a word for today’s human.

Why they did so?

The answer is a minor chaos occurred in between two kids at school on an unnecessary issue. One of them belongs to Sekhani family, on returning back at his home, he complaint about that kid to his mother who instead to preach him just made a call to the other child’s house and used abusive language. The other day, Sekhani brothers lashed out that child’s house and started beating his father ferociously. On account to settle down the dispute, child’s grandfather jumped between to defend his son, the brutal brother slapped that old man and pushed him towards floor so hard that he lost consciousness and died on the spot. Family took him to the hospital and when doctors confirmed his death, Sekhani brother made a quick escape from the situation and started threatening the victim’s family not to take actions against their horrible sins. 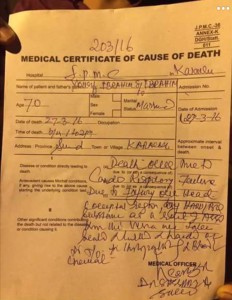 Previous Article I AM KARACHI